Why Pitch Clocks are the Devil

If you follow me on Twitter, you’ve likely noted that I get quite upset about the idea of pitch clocks. Why would I hate the supposed silver bullet that will end all pace of play concerns, bring new fans to the game, cause all fans to lose 25 lbs instantly, and make McDonald’s a health alternative to vegetables? Despite what you’re hearing about the benefits of pitch clocks, there are some concerns related to the health of pitchers. Let me explain why I have taken such a strong stance against them.

Muscle fatigue is a very specific process that decreases the amount of force that a muscle can generate. It is NOT just an expression of how tired a person feels. If a muscle is active, small amounts of muscle force generating capacity are lost at the smallest function level of the muscle – the motor unit. Overall muscle force at a joint level can be maintained by switching between which muscles are active, or recruiting additional motor units, but you cannot escape muscle fatigue. So let’s be clear on that – muscle fatigue is a decrease in muscle force at the muscle fiber level. The other type of fatigue that we study as researchers, is central fatigue. This is related to decreased output from the system prior to the muscle – so that means, a reduction of the available oxygen in the bloodstream, an inhibition in neural drive from the brain (such as pain, or decreased motivation), or inability to remove metabolites from the blood stream. These factors can occur, or not be occurring at the same time as muscle fatigue.

Dr. Jeremy Bruce, and Dr. James Andrews wrote a review article on Ulnar Collateral Ligament injuries (Figure 1), and one of their primary findings centered around the role of muscle fatigue on UCL ruptures. The findings boil down to this: when you throw a baseball as hard as you can, the stress on the elbow is theoretically more than enough to tear your UCL. What protects the UCL, is the activation of the muscles of the flexor pronator mass. If those muscles become fatigued, they will not be able to exert as much force, and as a result, the UCL becomes at risk of rupture.

So, how do you get away from this evil fatigue monster? Once again, its complicated (it depends on the types of efforts you’ve performed, how long you’ve been working for, etc), but in its simplest form, the prescription is: Stop! Recovery is ultimately dictated by the time you can rest. The time between pitches, or the time between innings, is when pitchers have time to recover from muscle fatigue. This is where my disdain for pitch clocks comes from.

Last year, I published a paper in the Journal of Sports Sciences 2  on the implications of pitch clocks on the accumulation of muscle fatigue. Compared to the self selected paces pitchers had (from FanGraphs), forcing pitchers to throw every 20 seconds increased fatigue levels for starting pitchers (Figure 2).

Technically, the rules (Rule 8.04) state that the pitcher has 12 seconds to throw a pitch once receiving the ball from the catcher – this is obviously not enforced. If this was actually enforced, there would be even more fatigue in pitchers. 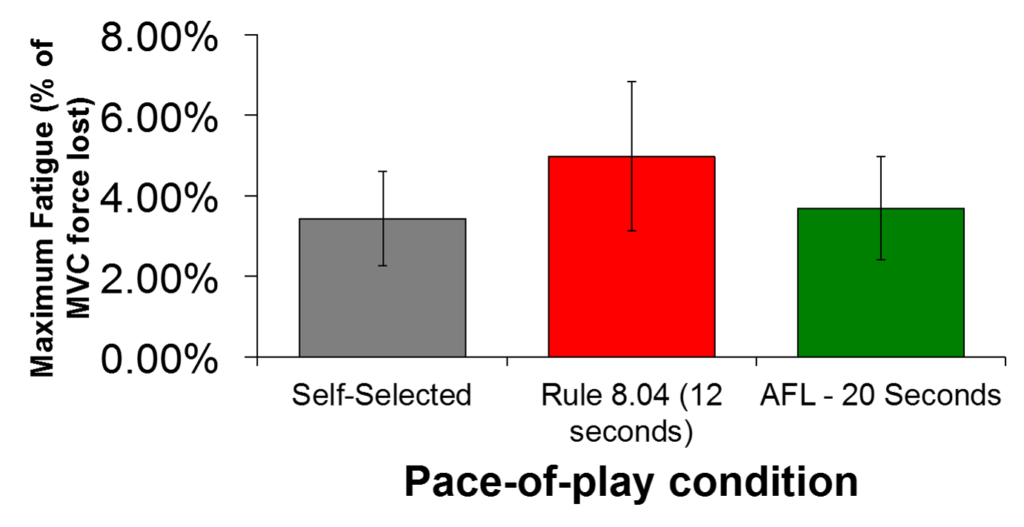 Shortening the amount of rest between pitches will increase the amount of muscle fatigue in pitchers. If you had 24 seconds of recovery, and now you only have 20 seconds of recovery – you will be more fatigued. How would this look in a typical major league baseball game? Not too long ago, I described a method to make some interesting graphs showing predicted fatigue levels in baseball games, using my fatigue model, and MLB’s GameDay data. As a Blue Jays fan, one of the most exciting moments I can remember as an adult, was when my favourite pitcher – David Price – was traded to my favourite team. In one of his first games as a Blue Jay, Price went 8 innings, and struck out 11 Minnesota Twins. Price has routinely been regarded as one of the slowest pitchers in the MLB – his pace often ranks in the top 3 of all starting pitchers. I replaced his long stretches during his games with the 20 second pitch clock limit, and this is what we’re left with: 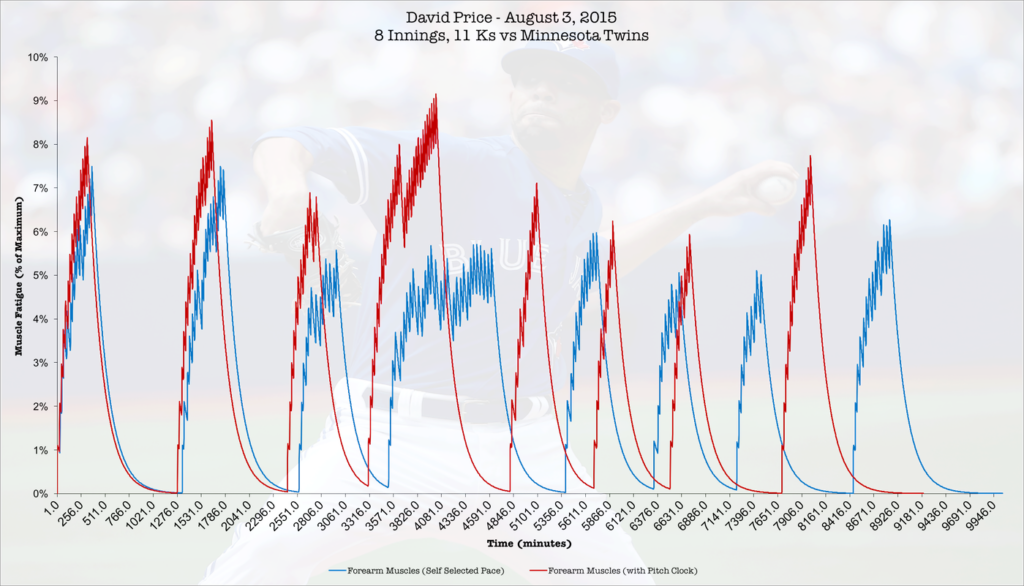 Predicted forearm muscle fatigue, with (Red), and without (Blue) the implementation of a pitch clock (20 seconds).

In this situation, (and without assuming a significant influence in the other team’s pace), we see a reduction in time of 8.38% – going from 167 minutes, to 153 minutes – keep in mind, this doesn’t factor in the bullpen visits, or the time spent celebrating the victory afterwards. In this case, this was the time of the first 8 innings for the home team – so there would be an other inning and a half to come. At the same time, you can see in red (the condition where there is a pitch clock), that there is a lot more fatigue with the pitch clock – particularly in the 4th, and the 8th innings. Peak fatigue levels are more than 18% higher when the pitch clock is implemented.

As I have argued in the past – it’s not just injury to worry about. It is assumed that pitchers will perform at the same level when the pitch clocks are in place, when in reality – pitchers who are fatigued are shown to have less command, and less velocity. This would in turn result in more base runners, further extending the game. I hypothesize pitch clocks would have a minimal effect in reducing the time of games, all things considered.

Will the MLB eventually go with Pitch Clocks? I wouldn’t be surprised – it seems like Rob Manfred is hell bent on his crusade to speed up baseball games, turning them into NFL Blitz/ NBA Jam versions of themselves. Are these changes needed? Time will tell – but right now, it seems like those who like baseball, are fine with it in the current state.