A Theoretical Concern for Weighted Ball Training and Workload Reductions

I wanted to start this (the final post of 2016) off on a sappy note. This has been the first year that I’ve been involved in writing about baseball from a scientific perspective. When I started my PhD at McMaster, there was a department seminar meeting, which focused on science and knowledge translation. The speaker, who was a world leader in her field, told us that on average – research takes 14 years to make it from the lab to the field. I made it my focus to try and reduce those numbers. While my PhD had an ergonomics application, I have really enjoyed trying to tie the worlds of baseball and ergonomics together. Fatigue Units, and the fancy fatigue graphs, and the paper arguing against pitch clocks, all use the model I developed for my PhD thesis. If you have read anything I have written this year, I am eternally thankful! Interacting with people through Twitter, email, and this blog, has been one of the most fun and rewarding experiences I’ve had as a scientist. I really want to thank Dr. Stephen Osterer, Dr. Michael Chivers, Tavis Bruce, Kyle Boddy, Michael O’Connell, Trip Somers, Kevin Kennedy, and Eno Sarris for helping me get my ideas out there. You guys know so much more than me about baseball, but thanks for listening to me anyway!

Alright, enough of that – time for nerd stuff.

I’ve had a chance to look at Fleisig’s most recent paper 1 on arm forces during weighted ball training. This paper is a very important step towards determining the safety of a very effective method for pitcher development. If pitchers are getting better, but increasing their risk of injury – what’s the point in throwing harder? At the same time, maybe throwing these weighted implements serves as a unique stimulus for muscle growth and arm health. A lot of questions are still out there waiting to be answered, but this is an important first step.

So, let’s look at things as simply as we can. One of the first equations you learn in physics, or in the application of physics to the human body – biomechanics – is that force is equal to mass times acceleration.

How does throwing something heavier result in less force in a joint? It all comes back to F = M*A. If we keep acceleration constant, and want to decrease force, we’d need to decrease the mass of the segment (and implement) being rotated. Similarly, if we wanted force to be lower, but increased the mass, we’d need to significantly reduce the acceleration of the segment. From table 1 in the Fleisig paper, we can see that the accelerations of the shoulder, elbow, and pelvis are all lower in the heavier ball conditions when compared to the underweight, and overweight baseballs. 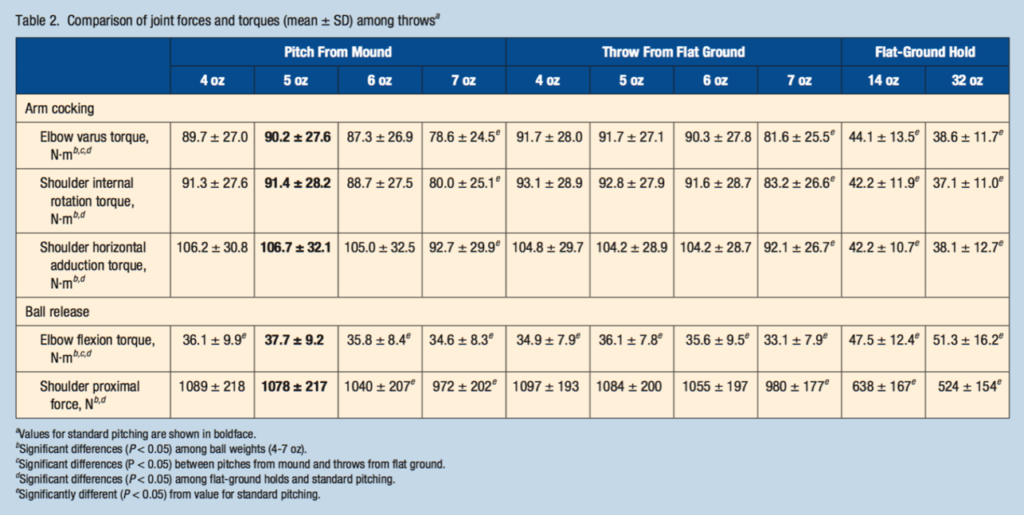 However, the overall varus torque on the elbow, and the directly transmitted torque to the ligament may not be the same thing.

Werner et al., (1993) 2, illustrated that torques incurred at the elbow during the pitching motion are greater than the known torsional torques required to rupture the UCL. Muscle activation is used to transmit these forces off of the ligaments, and prevent damage to the UCL. This is why it is dangerous for the flexor-pronator muscles to become fatigued, and lose their ability to produce muscle force during pitching (Bruce & Andrews, 2014) 3.

Joint rotational stiffness refers to how rigid a joint is while it is moved 4. In the human body, stiffness is controlled by increasing the co-contraction of muscles spanning a joint. For example, activating the flexor muscles of the elbow (the biceps), as the elbow is rapidly extending (using the triceps). A stiffer joint (with more muscle activation) theoretically protects the ligaments by transmitting rotational torques from “passive” tissues (those tissues which are not contracting), to the “active” tissues (the muscles which are contracting). However, by increasing stiffness of a joint, the body loses the ability to produce high rotational accelerations and velocities.

Think about it as a whip – a thicker piece of rope can not rotate as quickly, and snap as violently as a thinner piece of rope. At the same time, the thinner rope is at a higher risk of fraying and breaking than a thicker rope. In the body, a joint with less stiffness can move faster, and more smoothly than a joint with more stiffness.

When throwing a heavier implement as hard as you can, there has to be more joint rotational stiffness in place to protect the ligaments. However, as the motion becomes more natural, and more familiar to the thrower, stiffness will decrease. This will result in a ball velocity increase, and possibly, a re-mapping of muscle activation patterns for throwing the ball when returning to a normal weight ball. If you want to get deeper into this, and the concept of stability, stiffness, and joint rotational impedance, check out the work from some really smart guys – Mike Holmes, and Joshua Cashaback.

Does throwing a weighted ball decrease the total varus force at the elbow, but increase the amount of force that is actually transmitted to the ligament? For the sake of arguments, let’s say this is true. How do pitchers manage to stay healthy, while throwing harder? One of the possible ways to protect the UCL is to make sure that muscles are able  to contract, and reduce the amount of force transmitted to the ligament. Putting in work in the weight room, and specifically, training the forearm muscles, could serve to cause hypertrophy, increasing the physiological cross sectional area of the muscle and allowing the muscle to pull with the same amount of absolute force, but at a lower effort level (associated with less muscle activation).

Research has shown there is very little effectiveness in restricting innings in pitchers with respect to preventing injury (Karakolis et al., 2016 5 ). Other research has shown that pitching velocity (and “Stuff” – sorry, shameless self-promotion) has increased linearly, year after year. 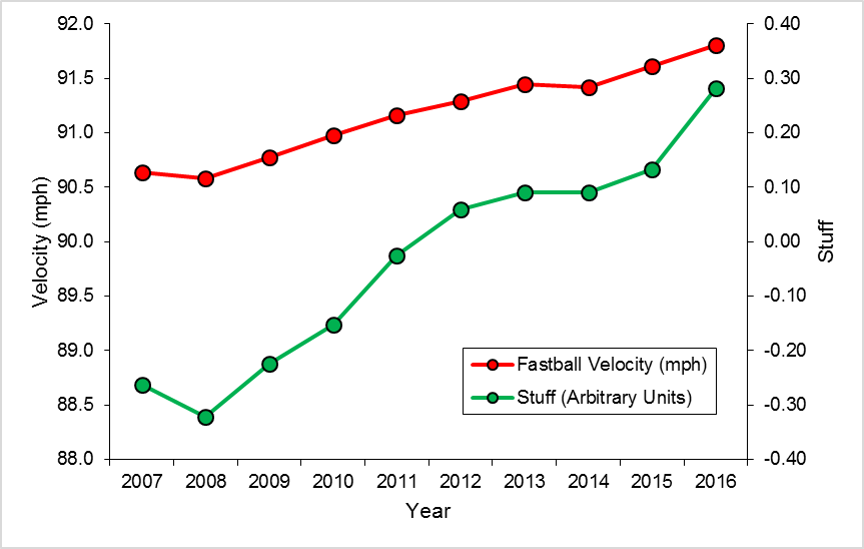 At the same time, the number of Tommy John Surgeries has also increased every year (particularly in younger pitchers) (Keri, 2015 6). Some people out there, who get their jollies on hoping people get hurt, so they can be proved right, even call this an epidemic. 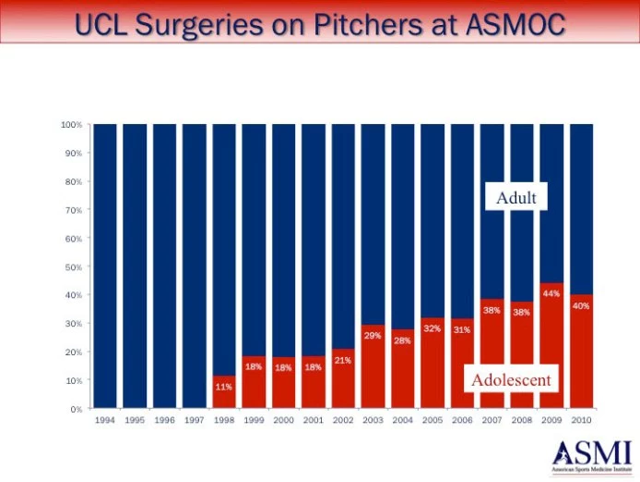 So, let’s bring my crazy, mad scientist, aluminum foil hat-wearing hypothesis full circle. Back to this theory on stiffness – pitchers are finding ways to shut off their muscles through different training regimes – yes, even maximizing your throwing intent to throw as hard as humanly possible, could play a role in reducing co-contraction and joint stiffness. Over the long term, could this be causing a re-mapping of the muscle firing patterns, reducing stiffness in game-thrown pitches, exposing the UCL to greater stress? Furthermore, do strict innings limits, like the ones that Matt Harvey and Stephen Strasburg faced, lead to a de-training effect? Pitching is a unique motion – one that is difficult to replicate in a gym. As a result, could there be atrophy occurring in the forearm musculature due to reductions in throwing? Fleisig’s paper hypothesized that the “holds” drill, and throwing of weighted baseballs, could be an effective resistance training strategy. Now imagine, hypertrophy occurs, allowing for protection of the UCL during high velocity throws. This happens in the offseason, when pitchers are preparing for their next year of competitive baseball. They throw frequently, with the intent of getting better. Now, they enter the MLB season, and arbitrary limits are placed on their pitching. To stay in the major leagues, they have to keep their velocity high – but now, they have lost some of that muscle mass they grew during their training. When they return to throwing – the velocity remains the same, but the protective mechanisms are now reduced.

This isn’t meant to be a stance for or against weighted balls. I don’t coach baseball – I’m a fan of the game, and truly enjoy applying what I know about how people move to the game I passionately watch. Keep in mind, this post is a perspective – it is not tested, or even extensively researched. Selfishly, I like writing these things, because there are people out there who have the access to pitchers, equipment, and can answer these types of questions. Consider this – a challenge point to unlock more information about how the body works. If you are using this as some form of gospel to take a stand against weighted balls – don’t do that. Don’t be a dick.

So, that’s my theory on how using weighted baseballs for training, and pairing it with workload restrictions in season, could lead to an increase in UCL injuries.

It’s either that, or it’s aliens. 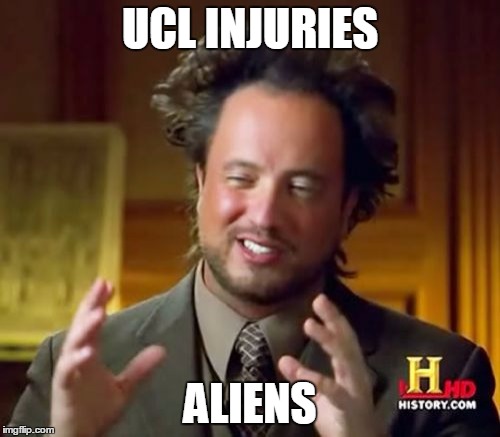