This is a three part series on the development and evaluation of a new workload metric in baseball pitchers.

So, back in the day – my friend and mentor Dr. Jim Potvin and I came up with a model that predicted muscle fatigue (Sonne & Potvin, 2016). This model outputs a value which represents the amount of force generating capacity that a muscle has lost. Relating this back to baseball – Dr. Fleisig has stated that muscle fatigue could lead to joint laxity, and as a result, increase the amount of strain on the ligaments of the arm during throwing (Fleisig et al., 1995).

To put it simply, there are two ways that you can influence the amount of fatigue your muscles have. The first – you can increase or decrease your fatigue level by either increasing, or decreasing how active your muscle is. If you have your muscle on at 50% of its maximum for 5 seconds, compared to a contraction of the same duration at 30% of its maximum – the 50% contraction will be more fatiguing. The second way to change fatigue levels is the amount of rest you receive. If you have more time to rest, you will reduce your fatigue level. This is the principle that was expressed in the paper I wrote arguing against the use of pitch clocks in MLB from an injury prevention perspective.

Now, currently – the fatigue model runs in MATLAB, which is definitely not software we’d expect to appear on most pitching coachs’ computers. In fact, it’s usually so expensive that only academics or engineering companies will have access to it. I wanted to come up with a way of helping people determine the fatigue levels in their pitchers without a lot of cumbersome technology.

I used the same subset of data from the paper on pitch clocks – 75 American League starting pitchers from the 2014 season, with their average pace, pitches thrown, and innings per start reported from the FanGraphs website.

Included these values as the inputs from the fatigue model which I ran in Matlab, and generated regression equations from the outputs. These inputs were:

This model output a predicted maximum fatigue level for 8 different forearm muscles (Brachioradialis, Flexor Digitorum Superficialis, Flexor Carpi Radialis, Pronator Teres, Extensor Digitorum, Extensor Carpi Radialis Longus and Brevis, and Supinator), but for the sake of this application – I’m just going to look at the average fatigue of these 8 muscles as the dependent variables for the fatigue model. Here is a figure from my pitch clock paper to explain how the fatigue modelling process worked (Sonne & Keir, 2016). 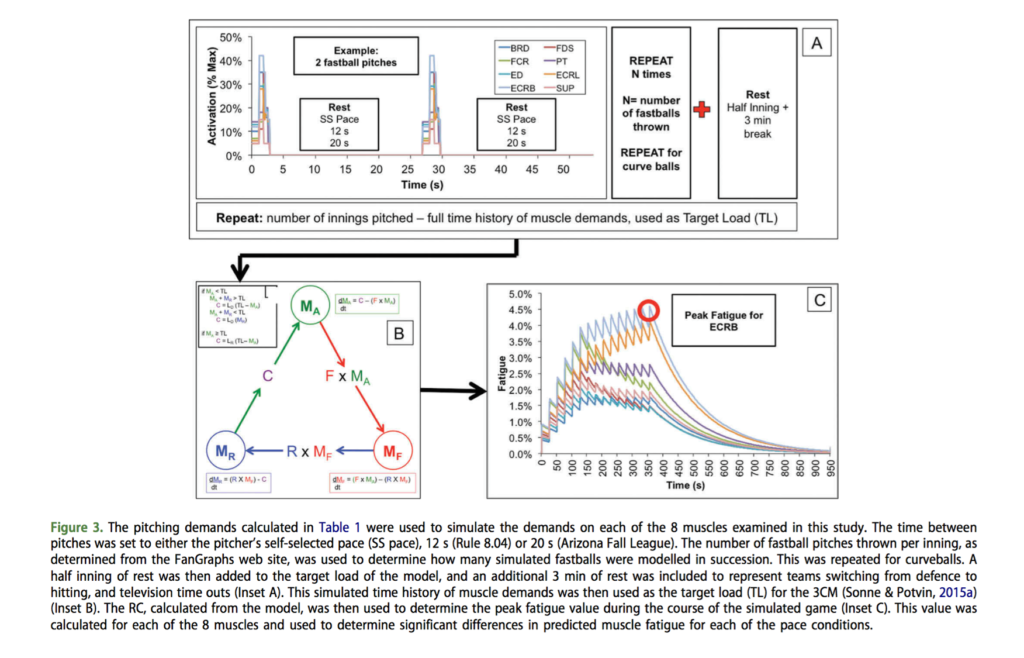 Of the four included predictor variables, only fastballs per inning, and pace between pitches emerged as significant predictors of fatigue level. These predictors were highly significant though, with an R2 of 0.95. Keep in mind – this is from already modelled data, so the amount of variability is low – this is just an easier way to access the fatigue level for this type of work (pitching).

The predictive equation for average forearm muscle fatigue is:

For example, pitcher A threw 15 fastballs in an inning, pitching the ball every 21 seconds. As a result, he has a predicted average forearm fatigue level of 11.06%. To examine the contribution of the individual components to this prediction, I looked at the correlation between fatigue and each independent variable. The number of fastballs thrown predicted 81.7% of variance in fatigue, with number of other/breaking pitches, # innings, and pace explaining 6.0%, 15.1%, and 24% of the variance in fatigue, respectively.

For the final model which only included # of fastballs thrown, and pace, this is how things shaped up. For every 1 second increase in pace, there was a 0.23% decrease in the amount of predicted fatigue (when # of pitches was held constant at 15 per inning). For every one fastball increase, there was a 0.32% increase in fatigue (when pace was held constant at 18 seconds per inning).

So, when brainstorming ideas for how to use the fatigue model as a workload metric, I bounced a few ideas off of some colleagues as to how I should name this fatigue based workload metric. There were some great ideas that emerged, but ultimately the best one was Fatigue Units – or, FU’s (Thanks, Jenn!).

So, that’s it for now – this is an example for quantifying forearm muscle fatigue in pitchers without needing to know how to program or use Matlab. In part 2, I’m going to propose a method for tracking FU’s over the course of a season, and in part 3 – I’m going to finish this off by providing some spreadsheets to help you track FUs in your pitchers.